The majority of people I have talked to that currently use Twitter regularly have all admitted to thinking Twitter sounded like the stupidest idea ever before using it. The approximately 85% of U.S. adults not on Twitter probably still think it’s the stupidest idea ever.  Until you use Twitter and learn some benefits to utilizing this tool, you won’t know its potential.

Get a visual of the growth of Twitter with this infographic: The Path to 10 Billion Tweets 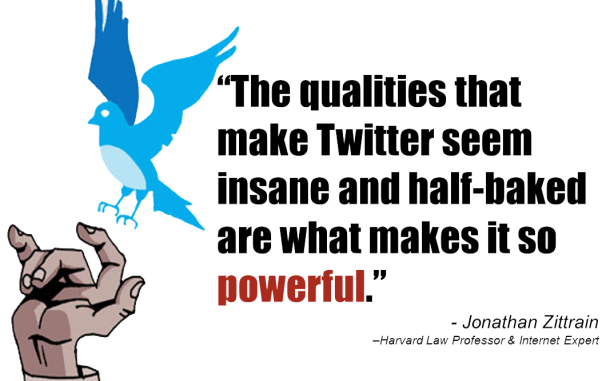 Here are 5 reasons to start using it:

Twitter makes it easy to catch all the latest updates in your personal social network, both by being easily digestible (at on

ly 140 characters per tweet, tweets are easy to read in bulk) and by letting you create “lists” of people or brands that you want to follow. Using an external application, such as TweetDeck or HootSuite, you can monitor several lists in easy to scroll windows.

Keeping up with the News:

From newspapers to magazines to TV stations and cable news, it seems everyone is adopting Twitter as the coolest thing since sliced bread. News is easily digestible from a variety of sources at once using lists.  Using an external application, such as TweetDeck or HootSuite, you can monitor several lists in easy to scroll windows. News doesn’t just come from the stations, many time news hits Twitter before it gets to print.

While networking is best done using more than one method, Twitter is a low-maintenance way to keep up with your contacts; such as potential employers, co-workers, colleagues, or even clients around the globe. You can share links to industry-related information, post updates on your own work, and keep in contact with colleagues at a distance.

Just as Twitter can be used to bring together friends and family across the globe in small bursts of conversation, it can also be used to find advice or camaraderie using hashtags. Hashtags are what they sound like: tags with a pound sign before them. If you’re looking for information about app, you might tweet: “Does anyone have advice on an app for marking up PDFs? #pdf #app” By including these tags in your tweet, it can be found by other users who may be following one or more of the tags you use. Hashtags are also used for Twitter Chats, which can be used for discussion and personal learning networks of tweeters around the same topic or industry.

You can use Twitter to get into contact with fans of your business, regardless of whether you’re a brick-and-mortar store, an online store or a blog. Twitter gives you space to spread your message and share. While you don’t want to treat Twitter as a billboard, Twitter does provide a potent medium for sharing blog posts and thoughts on your industry, and the service allows you to interact with your followers on a personal level. Don’t just share you information but reply, retweet, and share your followers tweets related to your business.

Don’t give up after 10 tweets! Twitter is not for everyone. If you want Twitter to work for you, you gotta work at Twitter. Twitter can be a powerful and effective tool, if you commit to it.

Want some quick resources to learn more about twitter?

All a Twitter: A Personal and Professional Guide to Social Networking with Twitter by Tee Morris available at Amazon Paperback or Kindle