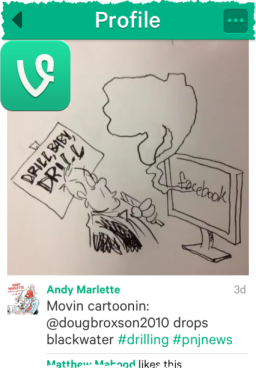 Start off every Monday morning learning about a new app with my App of the Week posting. This week I’ll take a look into the latest social media craze and the app that helps you make a 6 second videos to share with the world. Twitter recently announced a smartphone app called “Vine” that allows you to take a video that is limited to 6 seconds and continues to loop. It is not a totally new idea. There are competing apps called Viddy and Tout that are similar in recording short video burst but Twitter allows you to see Vine videos right in line with Tweets.

Is Vine the latest Instagram for short videos? It’s starting to develop a unique crowd of creatives, who are producing 6 second masterpieces.

Why would you use Vine, isn’t that 6 second of video just dumb? Maybe we shouldn’t be so quick to put the idea to bed. Twitter took texting to a new level and put it on steroids. Maybe a short and simple video is enough to get a powerful message out that is memorable.

Nick Cicero Lead Social Strategist at Livefyre recently blogged on Social Fresh about 15 Brands already using Twitter’s New Vine App. Right now, Cicero believes it’s about experimentation for users and businesses. Kerry O’Shea Gorgone Professor of  Marketing at Fullsail University stated, “At first, I didn’t think Vine was worth trying. How could anyone tell a complete story or say anything worthwhile in six seconds? Then a friend convinced me to give it a whirl, and I instantly saw the magic in it.”

Watch this quick walk-thru of Vine and a few examples of what people and brands are producing on Vine.

3 thoughts on “App of the Week: Vine”