Social media be used in innovative ways to engage, excite, and educate students through a broad spectrum of disciplines. I’m going to cover a few real examples in the next few weeks in a series called Social Media in Education.

The first in this series is an actually example taken from Wankel C. (2011) Teaching Arts and Sciences with the New Social Media. This book is full of great examples that happen been tested and tried by various faculty in the arts and sciences.

The final group project is a collaborative multimedia public service ad campaign that raises awareness about a local cause or service of the students’ choice. Final projects require at least three different kinds of visual texts, and can include a flyer, logo, billboard, YouTube video, and Facebook fan page. Social media, including Facebook campaigns, Twitter accounts, and YouTube videos, were utilized as components of integrated social media ad campaigns.

Example of a final project: The Facebook page  “Forever-in-a-landfill” consisted of a logo, a billboard, a YouTube video, a tote bag, and a Facebook fan page. The Facebook page featured all of the components of the campaign as well as provided a space to post-related information and build community around the issue. 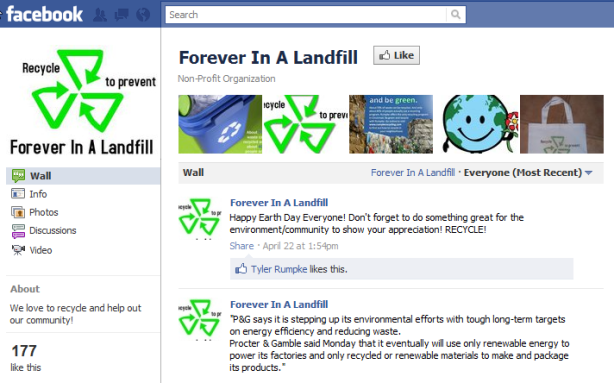