HeyTell – Walkie Talkie for the iPhone

ProfessorJosh Posted on April 13, 2011 Posted in App of the Week, Review, Tech Tricks and Tips No Comments 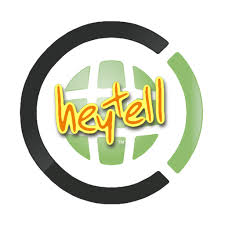 Remember as a kid how cool it was to have a walkie talkie to talk with you friends? In early 2000’s Nextel was all the rage for a grownup version of the walkie talkie. Now it’s the iPhone turn with an app called HeyTell.

Heytell isn’t exactly new, but I just recently rediscovered it now a group of us are using it in the office. I remember reading an article about this walkie talkie type app created by this couple who are traveling around the country in a RV but didn’t think I would really use it. Never was a fan of people using their annoying nextels in public but decided to give HeyTell a try. I’m guessing there’s others out there who don’t know about HeyTell and would like a few more details before downloading.

It combines the convenience of text messaging with the personal touch of phone calls. And it’s a much safer alternative to texting if you’re on the road or in a hurry and need to leave a message for someone.

Heytell takes out all the legwork of  dialing numbers, waiting through rings, listening to the voicemail, and then finally the beeeeep! Instead, just select your contact, record your message, and they’ll receive a notification a message is waiting for them to check at their convenience.

I would say the most inconvenient and semi complicated thing would be adding contact with your other friends who have downloaded the app. A quick tip, probably best to leave it a low privacy setting until you get your friends added.

Heytell has a simple demo available on their website, which shows how to do the most basic functions of the app: push a button, send a message, and share location. Plus it’s no just for iPhone any more, it’s available to Android users now too.

The Extras tab allows for some in-app purchases such as Voice Changer (sound like a robot or high pitch), Emoji, Message Wipe (lets you configure when to automatically expire messages), and Group Broadcast (enable Group lists under the Contacts screen). The first three cost $1.99, the last $2.99. All a little bit much in my opinion, but perhaps worth the convenience to others since the intial app is free.

Visit the App Store for more information and download for the FREE HeyTell App Don’t like it – Delete it – It’s Free!

0 Comments on “HeyTell – Walkie Talkie for the iPhone”